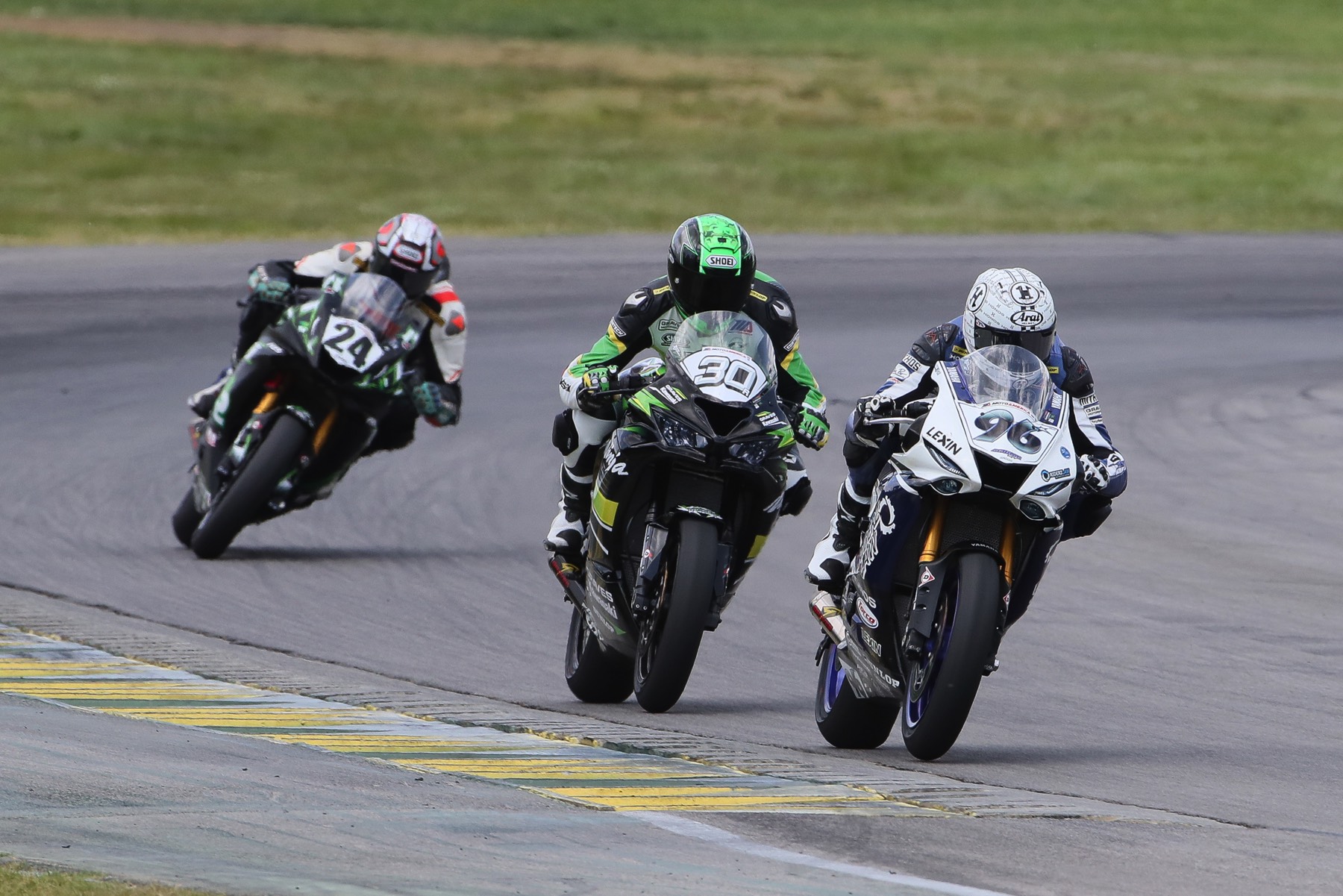 After battling for a podium finish at Road Atlanta and coming up just short with a 4th place Finish, RiderzLaw Racing’s Jason Aguilar was looking to compete for podiums at Virginia International Raceway. Life decided to throw some additional obstacles at Jason. Traveling on a redeye back East, Jason picked up a nasty virus. Being sick, coupled with the new two-day schedule, left very little margin for error. By Saturday, Aguilar’s illness was such that he was having a difficult time functioning. Still, he was able to manage 6th place in morning practice and just 6 tenths off a top 3 result.

Qualifying came up 2 hours later, and Jason continued to improve his lap times. Jason ended up qualifying 7th, 1.5 seconds off the pole position time. Despite the 1:27.9 being a personal best, he knew he could go faster and was determined to improve in the races. Starting from the 3rd row, Jason got a good launch, but got pushed out wide going into turn one, which cost him a few positions. Jason went to work regaining positions and was running in 6th when a crash brought out the red flag. Gridded from 5th for the restart, Jason again got pushed out wide in the first turn and dropped a couple of positions. By the 6th lap, Jason had regained 5th, but the guys in front of him had checked out and he could not close the gap.

Race Day for Race 2 brought a new set of challenges. It was wet, then dry, then wet again. The race was delayed due to heavy rainfall at the last second. On top of that, Jason was feeling better but still sick. Right as it looked like it was going to be a wet race the track started drying out. Jason went out for the warmup lap on dry tires, which at the time was the right call. Then out of nowhere, the skies opened up with a crazy rainstorm while on grid. With the swift actions of Jason’s crew, they were able to change back to rain tires before the race start.

At the start, going into the first turn, a rider hit the back of Jason’s bike and that sent him into another rider. Jason then dropped all the way down to 23rd place at the end of the first lap. Not giving in, Jason just put his head down and went to work. He was able to start picking off riders and move up while running laps that were on pace with the top 6 riders. However, by the time he had moved up 11 positions, a red flag ended the race early, leaving Jason in a disappointing 12th place.

Jason Aguilar
“It was a very tough week for us. We had some good momentum after Road Atlanta, and I knew I could battle for podiums, but viruses, bad starts, and some bad luck kept us from getting there. Still we are in 6th place in the championship and are one of only 7 teams to score points in each race. We are looking to rebound at Road America next round. My RiderzLaw Racing Yamaha R6 continues to be one of the fastest bikes on the grid, and we hope to use that speed to get up to the front at Road America.”