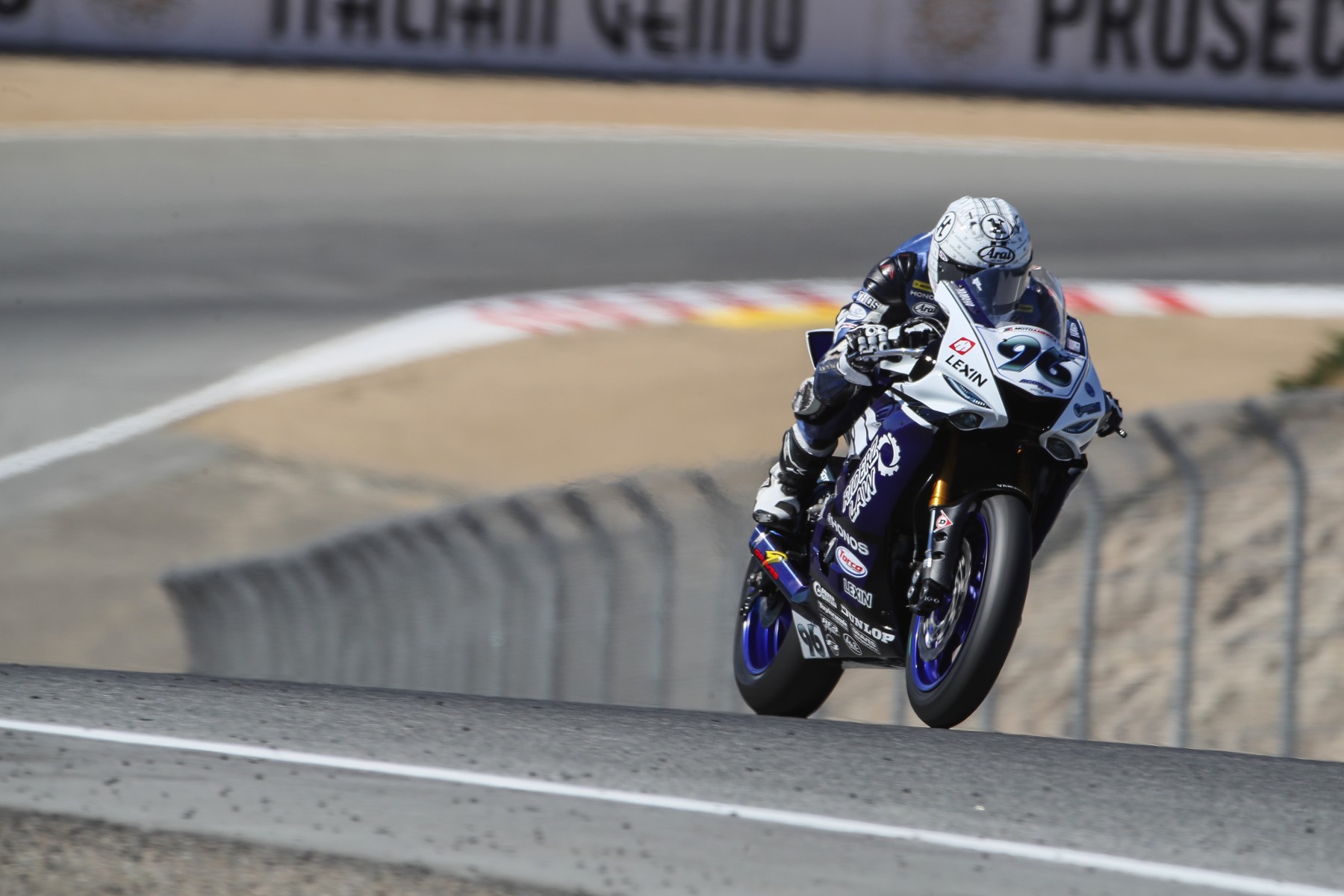 With 4 weeks between races after Utah, Jason Aguilar was going to focus on rest and conditioning to recover from injuries and illness in preparation for the FIM World Superbike and MotoAmerica Championship at Laguna Seca Raceway in Monterey. Those plans were quickly derailed when Jason was returning home from the gym late at night, tripped over the front steps to his home, and left a dent on the front door from his head while badly dislocating his left pinkie finger.

Jason then followed that up with a bad sore throat that led to an inner ear infection that required to a second trip to the Emergency Hospital in the days leading up to the race. Still battling illness when Jason was coming up the hill to enter the track for Friday practice and qualifying, he had to pull over to the side of the entrance road due to nausea. Not the best start to the race weekend.

Despite all that adversity, Jason still managed to finish 7th in morning practice. Afternoon qualifying saw Jason turn more laps than any other rider, but he started to tire toward the end of the session and was only able to qualify 10th. Due to the tight scheduling for the combined WSBK and MotoAmerica event, Jason was not scheduled to ride on Saturday, and was only scheduled to attend the Paddock Show hosted by Michael Hill in the morning and autograph posters. With a day of rest, Jason was hoping to finally feel better for Sunday’s second qualifying session and race.

Sunday’s second qualifying session started with perfect weather and perfect track conditions. After getting some rest, Jason was feeling somewhat better. Jason came in for a tire change with about 10 minutes to go and was running in 9th having just put in his personal best lap time at Laguna Seca. Just as Jason was about to put in another best lap that would have certainly moved him up in position, the red flag came out from another rider’s crash, ending the qualifying session early with 4 ½ minutes remaining. 9th would be his starting position for the race, since the tight schedule for television did not allow for the session to be completed.

At the start of the Supersport race, Jason got pushed out when a rider in front of him wheelied across his line. That caused Jason to lose a couple positions and he came across the line in 11th place at the end of the first lap. On the second lap, Jason had the fastest trap speed of the race at 140.459 mph, picked off the 10th place rider, and set out after the 9th place rider who was now 1.2 seconds ahead. By lap 6, Jason was closing the gap, and a crash up front allowed both riders to move up a position.

At the start of lap 7, Jason had closed the gap on the 8th place rider who crashed out in Turn 2, forcing Jason to brake to avoid the crash. That resulted in Jason moving into 8th place, but he lost a couple of seconds to the 7th place rider who had extended his advantage to 3.5 seconds. Jason started his push hard to make up the 3.5 second deficit. By lap 16, Jason had closed to 0.2 seconds. On the next lap Jason made the pass for 7th place and pulled away in the final laps to secure his finishing position. The 7th place finish was certainly not what the team was hoping for, but under the circumstances, it was an excellent result.

Jason Aguilar:
“While I was not in the best shape coming into the race weekend, my team gave me a great bike as shown by the top speeds I was consistently setting during the weekend. My setup was good from the start and I am really happy with my team now. Being the closest race to my home in Sothern California, many of my sponsors attended the race which was really cool. I was glad I was able to give them a good result, and I am really looking forward to Sonoma next month.”