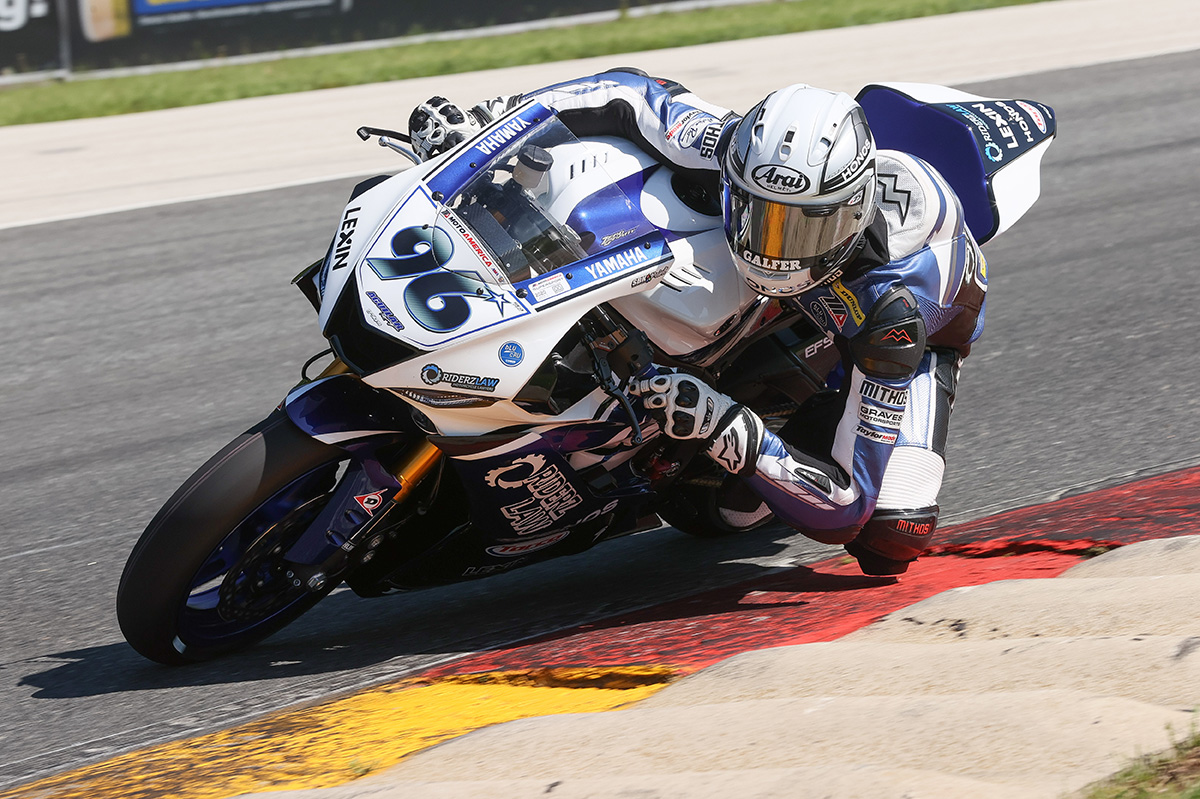 RiderzLaw Aguilar Racing rider Jason Aguilar began his MotoAmerica Supersport Championship campaign in fine style at the season opener at Road America, bringing his Yamaha R6 home in third place in the weekend’s second race, securing a maiden podium in the class, after starting from fourth on the grid after an impressive qualifying performance.

Aguilar, who finished eighth overall in the 2019 series, produced the best weekend of his Supersport career to date and even though a technical issue forced him out of the podium fight in race one, the Californian bounced back to bag sixteen points in the second 11 lap encounter.

In both races the #96 Yamaha ran strong, running at the sharp end throughout, ensuring that confidence is high for Round 2.

Sunday’s second encounter provided action aplenty with Jason even running off track on the warm-up lap. Despite his pre-race scare, he was able to take his place on the grid before showing a front running pace that initially placed him fourth. A short while after the flag the news came through that a rival ahead had been disqualified for a technical infringement thus promoting Jason to the final spot on the podium.

The next round of the 2020 MotoAmerica Supersport Championship sees the series return to the Wisconsin venue at the end of June.

Jason Aguilar:
“Qualifying one went pretty well. I ran third right up until the end when I just got pipped. I had a small issue which stopped me from lapping at the end of the session but overall, I was content. We haven’t raced since September so I’m still trying to get my strategies back and get used to the bike as I haven’t been able to do as much testing as we usually would before the opening round. We made great progress for day one and the plan was to push for the front row. We made some changes overnight and tried a few new things in second qualifying. I was able to improve my lap time after changing the tyres, and although I would have liked a couple more flyers, I was happy with how it went. I am a little frustrated to miss the front row and had I not caught a slower rider on my last lap, which was still my fastest, maybe it was possible. I had a good flow going but it isn’t the end of the world to be starting on the second row. I got a decent start in race one but right off the line something felt wrong and the bike sounded weird on acceleration. It was going slow and I thought maybe it had dropped a cylinder or something. It got worse and worse and I was pushing so hard but just getting slower, I couldn’t figure it out. Eventually I was black flagged even though I didn’t see any oil leaking. I was little bummed as it meant we forfeited any points which kinda sucked. We borrowed an engine and rebuilt the bike for race two. I was off the track on the warm-up lap in race two after a dip-shit move saw me out brake myself and run through the gravel, I guess I was just so pumped to make amends. It was a crazy race. I got a decent start, but my adrenaline was high after what just happened. Once I settled in, I fought my way up to fourth and I thought I could maybe catch SDK for third, but I screwed up and ran on again. I fought back to fourth again and just cruised to the flag. It wasn’t a bad weekend all in all, but it got better after I was informed, I actually got third after Paasch was disqualified for a tech infringement. It’s not the way I wanted to take my first MotoAmerica Supersport podium, but I will take it. Massive thanks to my entire crew and everyone that supports me. I also want to say well done to MotoAmerica for ensuring the weekend went ahead. A strange one for sure with no fans but man it was good to be back on track!”