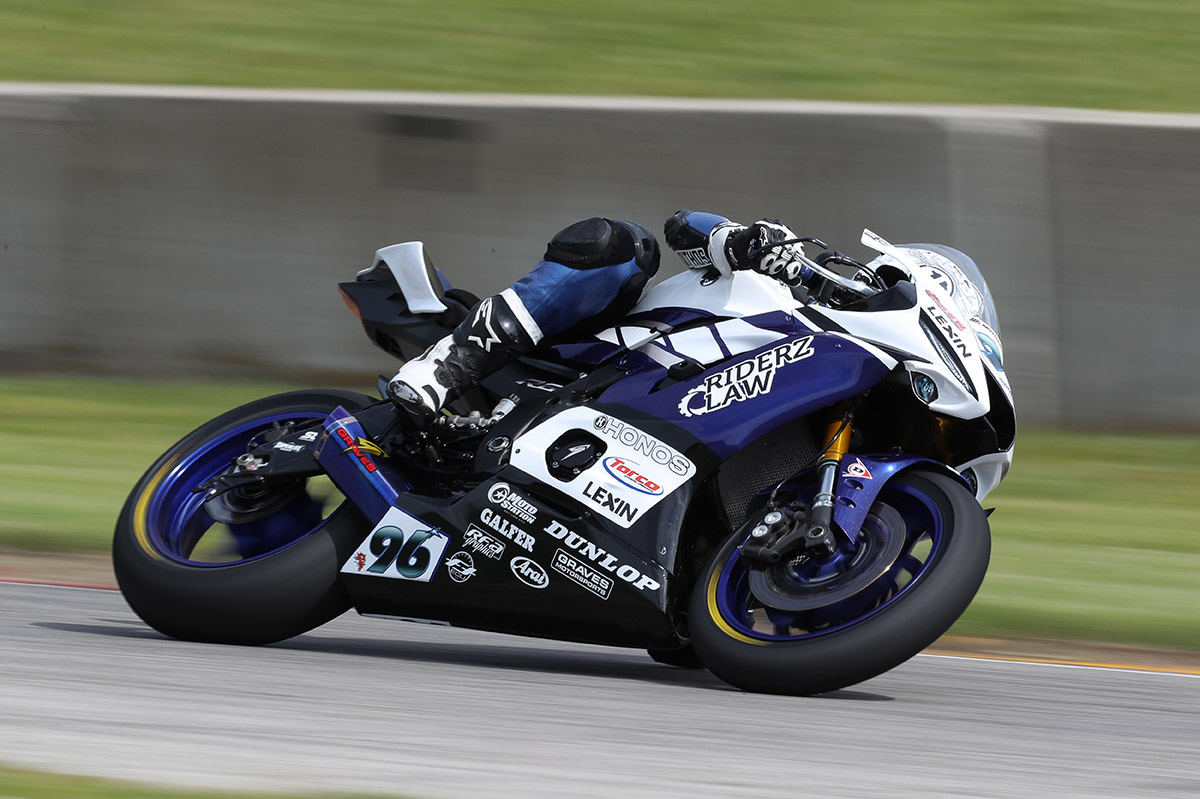 Jason Aguilar picked up his first double points finish of the 2020 MotoAmerica Supersport season at Road America this past weekend, converting fourth on the grid to a double fourth position finish in the latest round of the championship.

Starting strongly and moving into third at the start of the restarted Race 1 on Saturday, Jason was in podium contention until he overshot at Turn 5 on lap two. Able to recover, he regained his composure and was quickly back into P4, able to stretch a comfortable gap over his pursuers. With the podium out of reach he rode a sensible final third of the race, finishing fourth at the flag.

Sunday’s race ran the full eleven lap duration. Another great start saw the #96 hit the front on the opening lap, the first time he had led a MotoAmerica Supersport race, before keeping with the leading trio in the early stages.

His pace was such that he opened a significant gap over the fifth and sixth place riders and with the podium in sight throughout, he had plenty to focus on. The leading three slowly eased away but not by much meaning Jason crossed the line to take a well earned second fourth position finish of the weekend and elevate himself to fifth overall in the standings ahead of Round 3 of the series at Road Atlanta next month.

Jason Aguilar:
“The opening session of the weekend we were trying something new but unfortunately the chain came off. In qualifying one I was hard on the brakes and I felt something snap. I thought we had blown another motor but thankfully after an inspection back at the pit it wasn’t. The team did a great job to overcome the electrical issues and we had no issues at all during Q2 which was nice, and it meant that I could finally have a full day on track after the problems on Friday. I got stuck with some traffic in final qualifying, so I came in and changed tyres, albeit a bit earlier than I had wanted to. I was able to move momentarily onto the front row but just dropped back at the very end. It wasn’t the end of the world starting from the second row, I knew what I had to do. I actually made a good start when it came to the race which was a first for me. I was in the mix for third and then they red flagged it which I was a little bummed about. I was finally with the lead guys and now I had to do it all over again. I regrouped and made another great start on the restart. I got around Richie (Escalante) initially and third into the first corner. I was with the lead group but ran into turn five a bit too hot on lap two and dropped to fifth after surviving a big stoppie. I was able to get back into fourth relatively quickly and just got my head down. I put in a few good laps but realised that I wasn’t going to catch the top three, so I put it on cruise control and rode it in for an easy fourth place finish at the flag. I knew I had the pace, but I made a mistake and it is what it is. The main thing is that I showed I can run with the lead group, so the plan was to not change anything and push again in Race 2. I am usually really bad at starts but I was able to get another good one and had the fastest first lap of the race of anyone! I was second into Turn 1 and was able to draft SDK for the lead into Turn 5. He got me back right away which kind of messed up my drive a little and then Richie (Escalante) came past which messed me up again so Paasch (Brandon) also got by me. It sucked to get shuffled back like that but once I settled down my pace was good, and I was able to run with them for a little bit. I made a couple of mistakes but was able to close them back down. I was within 1-2 seconds of the podium for almost the whole race, but I had a few slides and although I really wanted the podium, I knew we needed the points so I backed it off a little. I feel we made some good progress and I was a lot more competitive. We are doing some great things here with the bike and the team is really working well. We go to Atlanta giving everything we’ve got and trying to win some races. Thanks to everyone for the support especially those that are now following me on Twitter!”